Finding the middle ground is important for a lot of things, and for a lot of reasons, including salary data. For example, when researching salary data, it’s important to know whether you’re looking at the mean, the mode, or the median. All three are measures of central tendency but they’re not all the same thing, much less the same number. 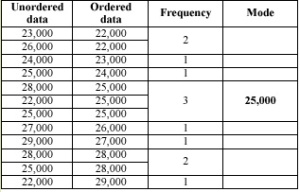 The mode is the most frequently reported data point. To find the mode, organize the list of salaries by rank, lowest to highest. Next, count the number of times each data point is listed. The data point that is listed the most is the mode.

Easy, right? But what if there are two data points that occur the most often? For example, instead of 29,000, that last salary amount was 28,000? When two amounts are represented equally, the data is bimodal. 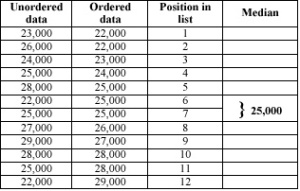 Using the data charts shown above, the mode is 25,000, the median is 25,000, and the mean is 25,334. All very close to the same number but which is the right one to use when setting a salary range? In this case, any one of them is a valid mid-point for your salary range. If the list of data points included significant outliers, however, the mode or median might be the preferred choice for your mid-point.

Generally, you’re not going to have so many data points when researching salary data but you should have 3 or more to insure adequate market representation when setting the mid-point of a salary range. A simple formula can be used to calculate the min and max for your salary range once the mid-point is determined.